I’ve waited to blog about the Mac App Store because I didn’t want to jump to conclusions based on just a few days of sales. We’re now at the end of the first fiscal month for Apple’s newest software store and I’m ready to reveal my findings. Let’s start with a graph, because everyone likes a good graphic. 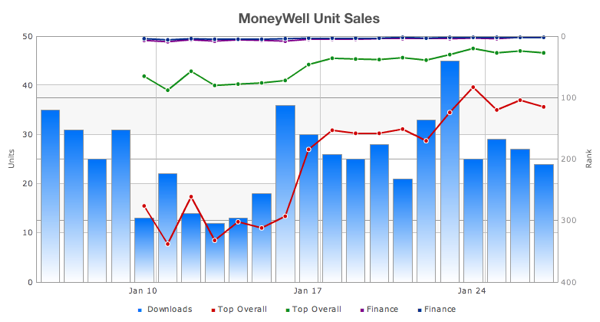 Above is a chart of unit sales for MoneyWell from AppFigures.com, a resource that I highly recommend for tracking your sales. The bar chart shows unit sales and the line charts show ranking. The labels aren’t perfect, so I’ll explain them. The red line is Top Paid Overall (units), the green line is Top Grossing Overall (profit), the violet and blue lines are Top Paid and Top Grossing in the Finance category, respectively.

For the tl;dr crowd, my overall opinion of the Mac App Store is positive. I think it’s already a great resource for increased sales and it will only become better as more Mac users migrate to 10.6.6 and are trained to use it exclusively when OS X Lion ships.

MAS or No MAS

My biggest concern selling my apps on the Mac App Store had to do with cash flow. I recently expanded my development team and we are shoulder deep in MoneyWell 2.0 development, so overhead is up. With a new major release comes a need for newer, prettier pixels, so I’ve also had to set aside cash to pay a graphic artist. I couldn’t afford to have my normal direct sales bank deposits, which occur four times a month, to turn into a 60-day wait for income. I won’t receive a dime from Apple on the sales you see in the above chart until the end of February. That’s just way too long to go without any revenue when employees and contractors haven’t signed up for the same two-month delay.

Besides losing cash flow, I also wanted to be able to compare direct and app store sales. Running both throughout the month of January was very revealing. My direct sales are right on target with my projections for January based on MoneyWell sales in the previous two years. Unit sales from the Apple store are three to four times our direct sales. The two stores seem to be capturing customers independent of each other. Selling my apps through the Mac App Store has almost tripled my overall revenue. I’m not complaining at all.

What’s more remarkable is that these sales are all without any significant promotion. I sent one mass mailing to my customer base announcing that we were in the Mac App Store and explained how upgrades and migrations would work, but I did no outside sales promotions. MoneyWell was picked as a Staff Favorite, which lasted for about a week, but the spikes in sales towards the middle and end of the month were strictly from more people finding us in the store.

The biggest boost appears to have come from reviews. MoneyWell received half a dozen 4- and 5-star reviews right before the first spike and doubled those reviews by the second spike. I have not adjusted the price at all; it still sells for $49.99 on and off the Mac App Store. There was a Debt Quencher sale, but that doesn’t appear to have a direction relation to the MoneyWell spikes. 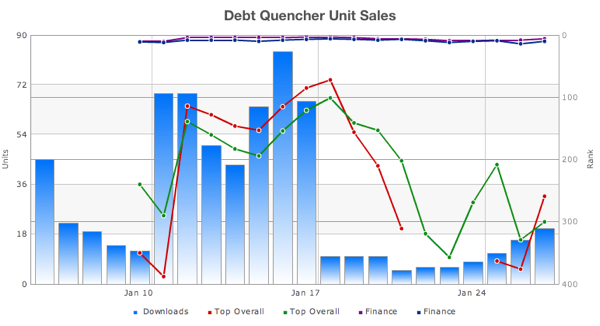 It’s pretty easy to spot when I offered a limited $4.99 sale price of Debt Quencher on the chart above. What’s harder to spot is the next transition from $14.99 back to $4.99. The last three bars show the new price point, which will probably become the new retail price. You can see that there is growth, but without a promotion that has a deadline for that discount, there was no spike. Here’s a chart showing Debt Quencher profit. 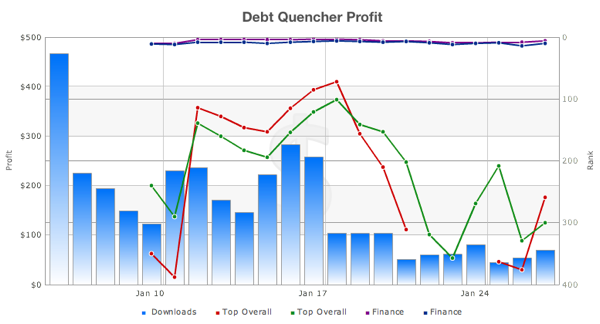 I’m currently earning less money selling Debt Quencher at the discounted price but I’m confident that sales will continue to rise at this lower price point. Even with the additional sales from the Mac App Store, this will probably never be a product that will cover the company overhead. Later this year, we plan to give Debt Quencher a revised UI and additional features to see if we can push this lower-priced product higher on the Top Paid chart. The goal is to use this impulse purchase product to lead people to our more profitable MoneyWell software.

What’s most exciting to me is MoneyWell’s rank in the overall top grossing list. We’ve been staying in the top 40 apps and have hit 20 as our peak. This means we get just a bit more visibility when people are looking around the store—the top 30 or 40 show without even scrolling down the page. I think we have an advantage over apps like games because the Finance category fits all its apps on a single page without needing further breakdown or navigation.

The magic number for visibility on the Top Charts page seems to be twelve, which is the number of apps that show before you have to click See All > and navigate deeper. My guess is that those apps are seeing higher sales by a factor of ten—or the square of that if Pixelmator is representative of the high-end revenue. Let’s just say that my goal with our 2.0 release is to break into the dirty dozen.

My strategy is to continue to sell direct as well as on the Mac App Store. I see no reason to give up an extra 25% of my profit just to steer customers to the Apple solution. My direct sales through my FastSpring store are highly automated and don’t require my intervention to process them. I can also run promotions and bundles on my site that can’t be done through the Mac App Store. If my customers prefer to get their software updates from Apple, I certainly won’t discourage them from using the other store.

It’s really the best of both worlds: My existing sales are staying at projected levels and Mac App Store sales are even higher with an upward trend. If at some point my direct sales drop to near zero levels because everyone prefers shopping in Apple’s house, I’ll think about turning off my back end. Until then, I’ll offer the same upgrades for my products no matter where my customers shop.